ICELAND- 'Getting around Iceland in 6 Days'

There is so much to see in Iceland and the best way to plan the perfect Icelandic trip is to PLAN.

Planning for Iceland ahead of time allows you to make the most of your trip. You will be able to check the sites off your list while also stopping at unknown stops along the way.

The beauty of Iceland is that everywhere you turn there is a site to see; hidden waterfalls, to off the trek trails, to obscure colourful houses hidden in the mountains.

-I took this trip with my boyfriend Ryan and our friend, Valerio-

WE TRAVELLED SEPTEMBER 2019 JUST AT THE END OF ICELAND'S SUMMER

We did Iceland in 6 days and I will explain how!

RENTING A CAR VS NOT

YES, rent a car! Iceland is a relatively small island but the only way to get from point 'a' to 'b' is by driving. To rent a car I first did my research, read reviews and compared prices. The website I used was Kayak. Kayak allowed me to compare the prices to the different car rentals located in Reykjavik, which led me to Blue Car Rental.

The next step after finding a rental company is to understand what type of car you are looking for. In Iceland there are F-roads, which essentially is off-roading or rough condition roads. If you are planning on driving on rough road conditions (which is almost everywhere in Iceland) then you will need a 4 wheel drive vehicle (4WD). No matter if you are going in the summer or winter, I do suggest a 4WD vehicle. This will not limit you to doing some off-roading and won't make you worried when in rough conditions.

After landing in Keflavik we were off to pick up our car rental. The great thing about Keflavik Airport is that there is a free shuttle service just outside of the airport that brings you to the location of the car rental company's pick-up location. The shuttle service brings you to different stops where you can find a selection of car rental company's. I recommend when booking your car rental to have your pick-up location at the airport, just because it makes things a lot easier and it gives you the advantage to start your adventure off early.

The process of pick-up requires a few papers to sign. They provided us with maps of gas stations which really helped. With our rental we got a package which included GPS. However, on top of that we paid for pocket wifi, which I got to say it was extremely helpful! I HIGHLY recommend a pocket wifi. The wifi is a perfect alternative to a GPS because it allows you to use Google Maps, which is a better quality navigation.

How to plan Airbnb's in Iceland

For our trip we wanted to stay in Airbnb's, this of course all depends on the type of trip you are planning. Because we were staying in Iceland for 7 days, research was done before to figure out the sites that needed to be hit. This led us to stay one night in Reykjavik and the other 6 nights in a cottage along the southern part of Iceland. Because our trip was only for 7 days, we decided to hit most of the sites located in the south of Iceland. We tried our best but, there is so much to see in Iceland!

Our Airbnb's are listed below

Our first night in South of Iceland we got a free show!

We landed in Keflavik Airport at 6:40am and decided to kick off our Iceland trip at the Blue Lagoon. After we picked up our car rental we headed to the Blue Lagoon which is 25-30 minutes away from the airport. We pre-paid our tickets because we wanted to secure our spot. You can pre-pay a time slot on the Blue Lagoon Website. We got the comfort package, which was more than enough. With this package you get a towel, one free drink (alcoholic or non-alcoholic) and one free silica mask. The women's change room is sectioned in locker cubbies where you have just enough space. (If you don't have a car you can store your luggage in an area near the entrance with a fee of course). Before you dive into the Blue Lagoon it is suggested to apply condition in your hair, only because the minerals in the lagoon can cause your hair to be hard to manage. I applied the complimentary conditioner and I found it to be more than fine but, keep in mind I didn't dunk my head in the lagoon. The Blue Lagoon is magical. The water is the perfect amount of warm. Our reservation was 8-9am, this means we were able to arrive anytime between 8-9am. We arrived a few minutes before 9am and the pool was already getting full. Although, the experience was totally worth it.

The Blue Lagoon is NOT overrated! 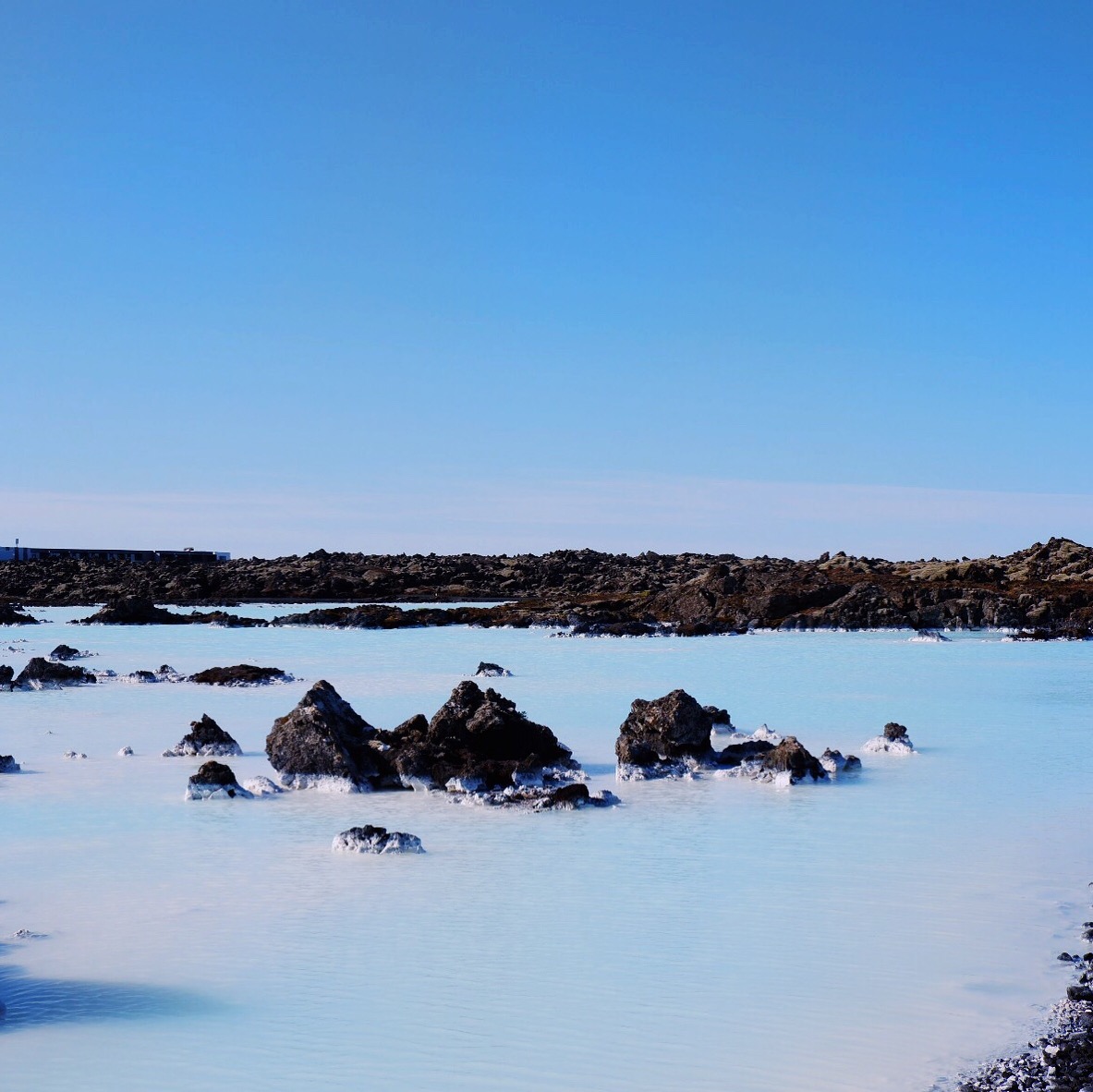 After the Blue Lagoon we made our way to Reykjavik, which was roughly a 40 minute drive (but driving in Iceland is an experience on its own). We arrived before our check-in time to our Airbnb so we decided to park our car near the Airbnb and start roaming the city. Reykjavik is a very different city compared to other cities I have been to in Europe. The city was filled with colourful and small streets. Over the past 7 years the city has seen an increase in tourism, there were noticeable tourists but, not enough to say the streets were filled (which is why I would recommend travelling off season). We continued to roam the streets and included a nice patio lunch.

Later that night we hit the town and drank some local beer at a small live band bar.

The following morning we went to the top of the Reykjavik church to get a view of the city. After that we were off to south of Iceland! 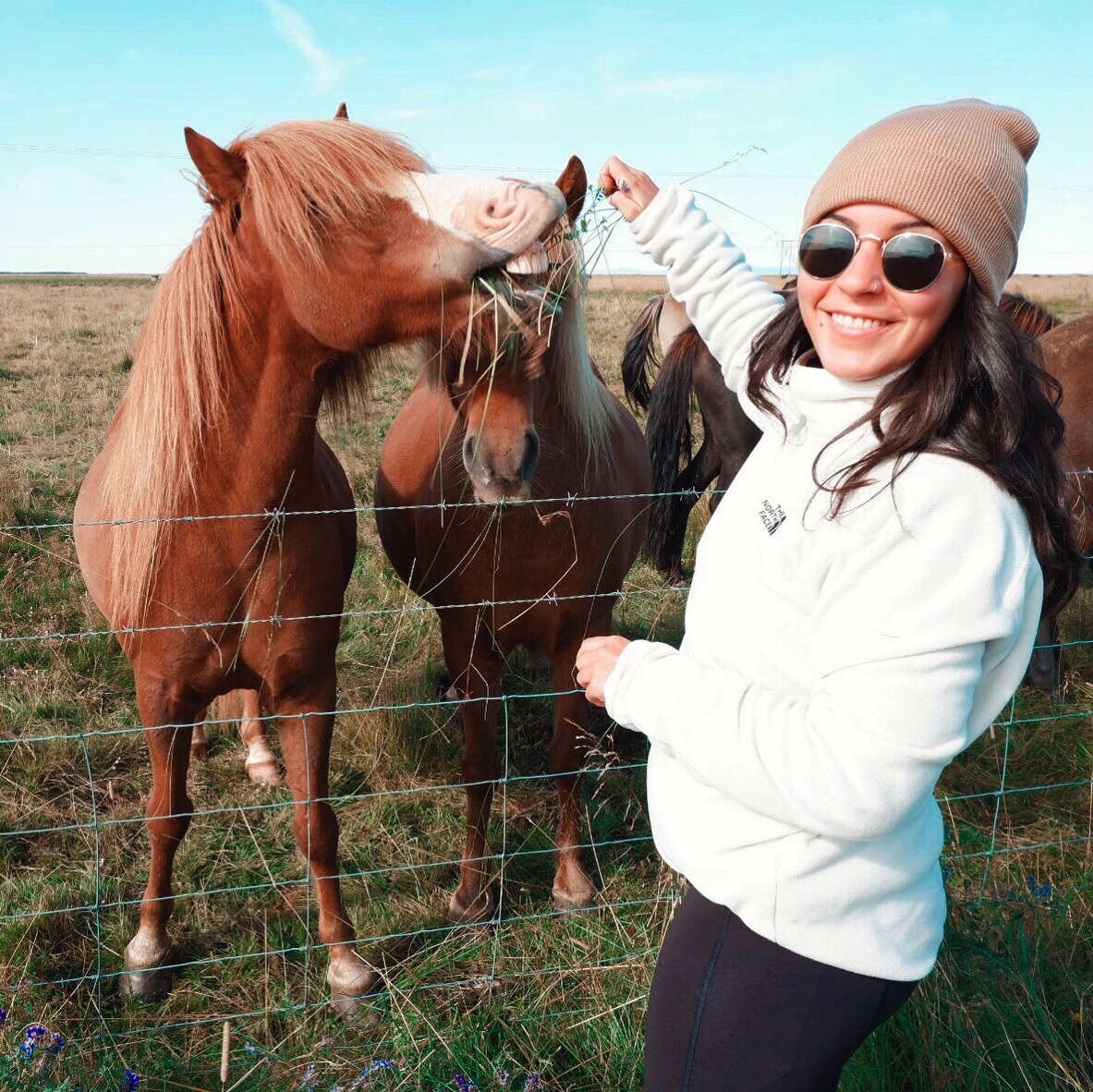 We left Reykjavik and were on our way to our South of Iceland Airbnb. On the way we decided to hit our first, but definitely not last waterfall named, Hraunfossar. This waterfall was crystal blue and left you in shock because of all the shades of blue it produced.

When in Iceland it is almost as common as seeing a squirrel in North America and that is the Icelandic Horse. These horses are short, stocky and super friendly. While driving along the roads you can spot these horses.

We found a group of them that were close to the fence and we parked our car to greet them. All they wanted to do was eat. Later on we realized that people began to follow us and stopped their car to come and greet the horses as well. For me it was a must to capture these unique and cute animals.

Later that day we decided to head to Vik. This is a small, colourful and quaint town with hidden but homey coffee shops and restaurants. We parked our car and had a coffee at, Restaurant Sudur Vik followed by a hike on a nearby mountain.

On our third day we headed off to our second waterfall called Skógafoss. The amazing feature of Skogafoss is that you are at level with the falls meaning you are able to get as close as you like (obviously would not get super close). It is an amazing thing to witness no matter how close.

Next stop was the famous Black Sand Beach. This Beach is located near Vik and is lies at the southern coast of Iceland.

This beach is a geographers dream. The remarkable, natural carved rock formations and its incredible forceful tied will blow you away. When arriving to Black Sand Beach there is a warning sign to keep a great distance from the water, because the tide is super strong and can pull you in quickly (and believe me when you see it you will understand).

To end the day off we decided to have a little snack outside surrounded by nature... and a few brews of course ;)! 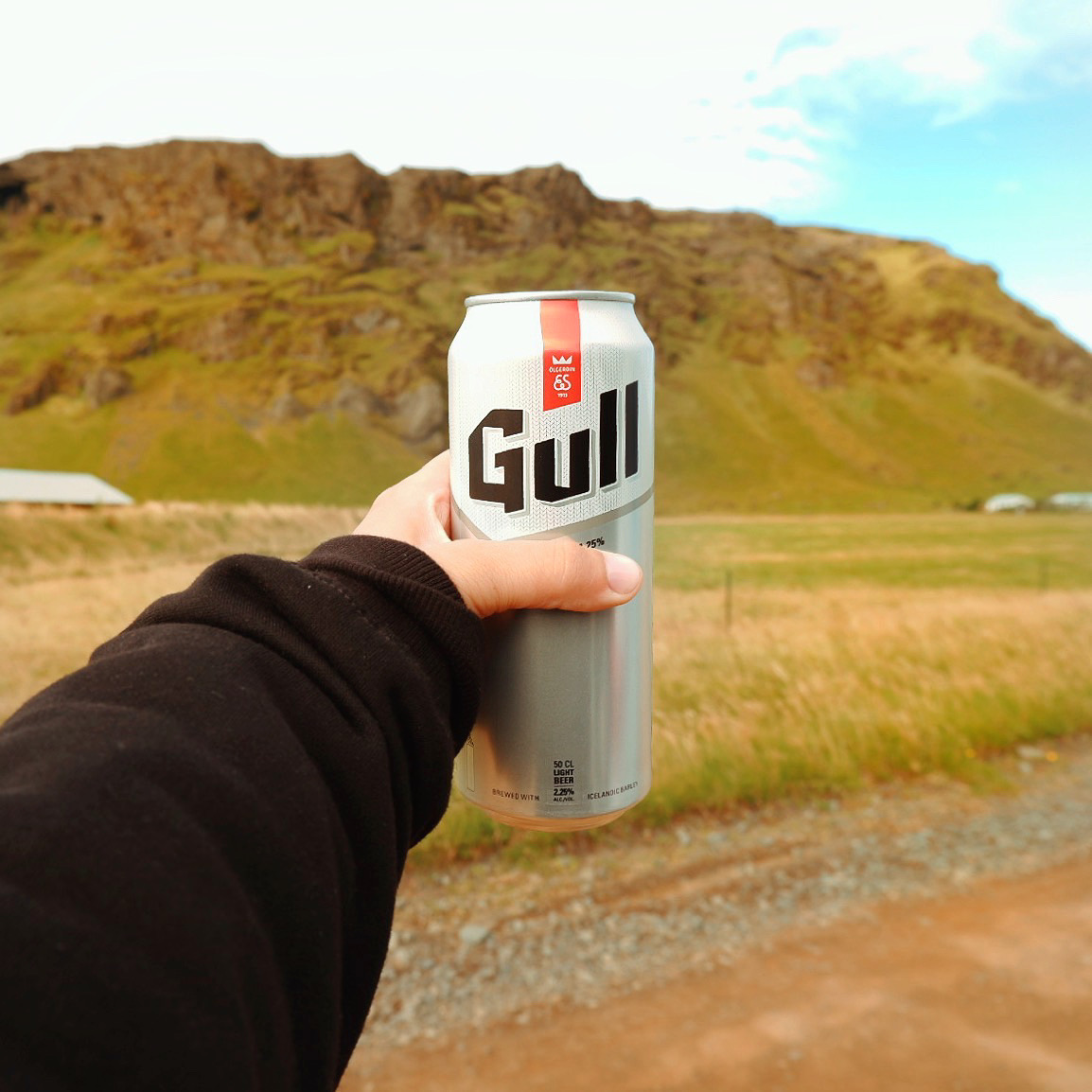 On Day 4 we drove towards ice, actually not just ice, but glaciers. Jökulsárlón-Glacier is a lagoon filled with blue waters and large floating glaciers. Iceland is known to be the land of 'fire and ice'; on this day we witnessed ice. This lagoon has a short passage way connecting to the Atlantic Ocean, allowing chunks of large ice from floating glaciers to settle its way in the lagoon. In the winter you will be able to witness large amounts of seals swimming their way in the lagoon. We were lucky enough to witness a little seal swimming in the lagoon. 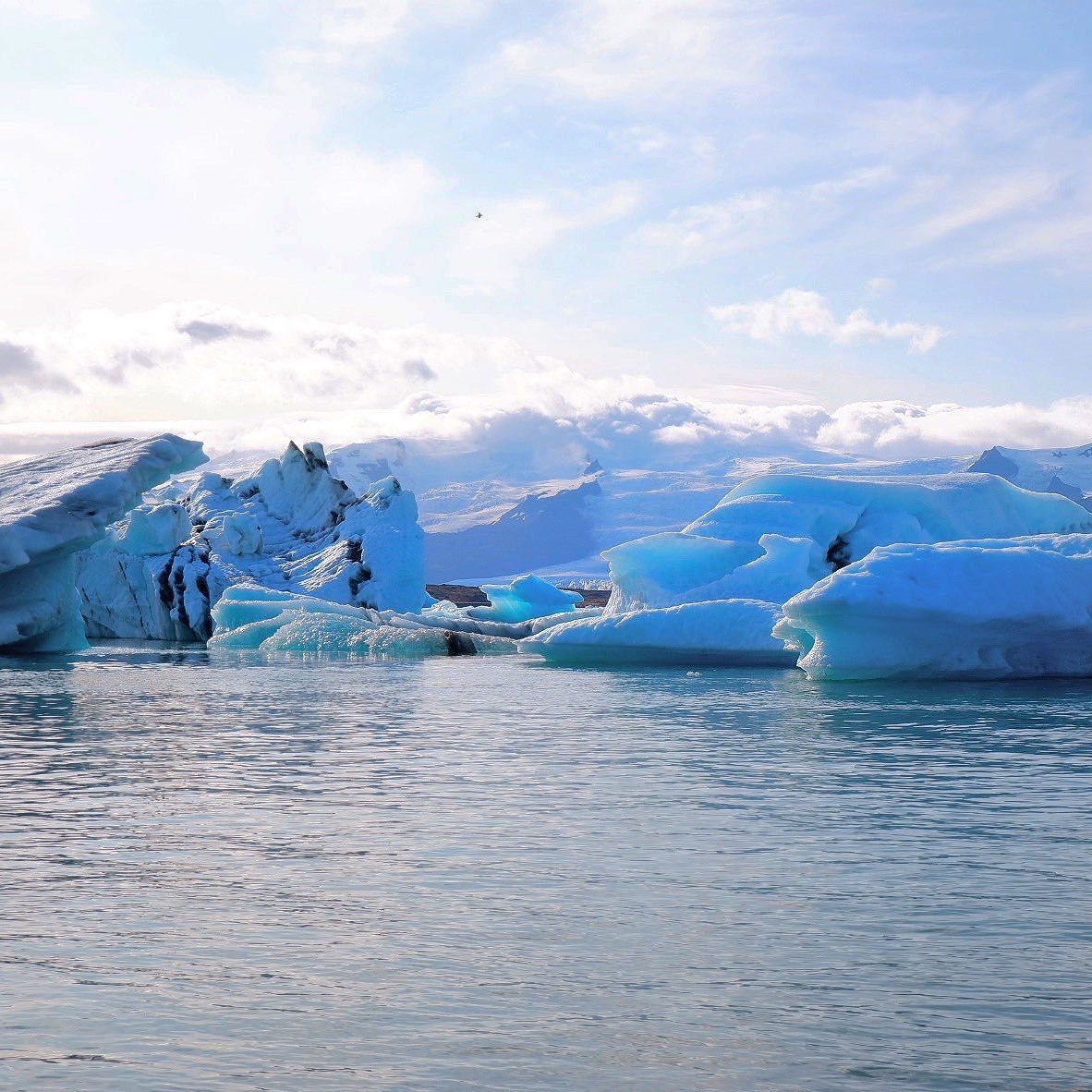 I do suggest if you plan on visiting Jökulsárlón-Glacier Lagoon, take a stop at Diamond Beach which is just nearby. Here you will be able to get super close to parts of the glaciers that run up on shore.

On day five we were off to witness 'fire'. Geyser's only exists a few places on earth and Iceland is home to what is known as 'The Great Geyser'. A Geyser generally located near volcanic areas. The groundwater that lies deep in the earth creates a boiling effect and results in water ejecting from the earth. This water is shot into the atmosphere with great speed and reaches extreme heat, which is known as a Geyser. It was absolutely crazy to see and it is a must on your Iceland itinerary!

Next stop was absolutely planned... We planned to visit yet another waterfall named, Seljalandsfoss. This was by far my favourite waterfall. We wanted to catch the waterfall at sundown because it is known to give off this remarkable rainbow... and it did not fail to do so. Just take a look for yourself.

At this waterfall you are also able to walk behind it, and if you go at sundown like we did then you will witness something like this... 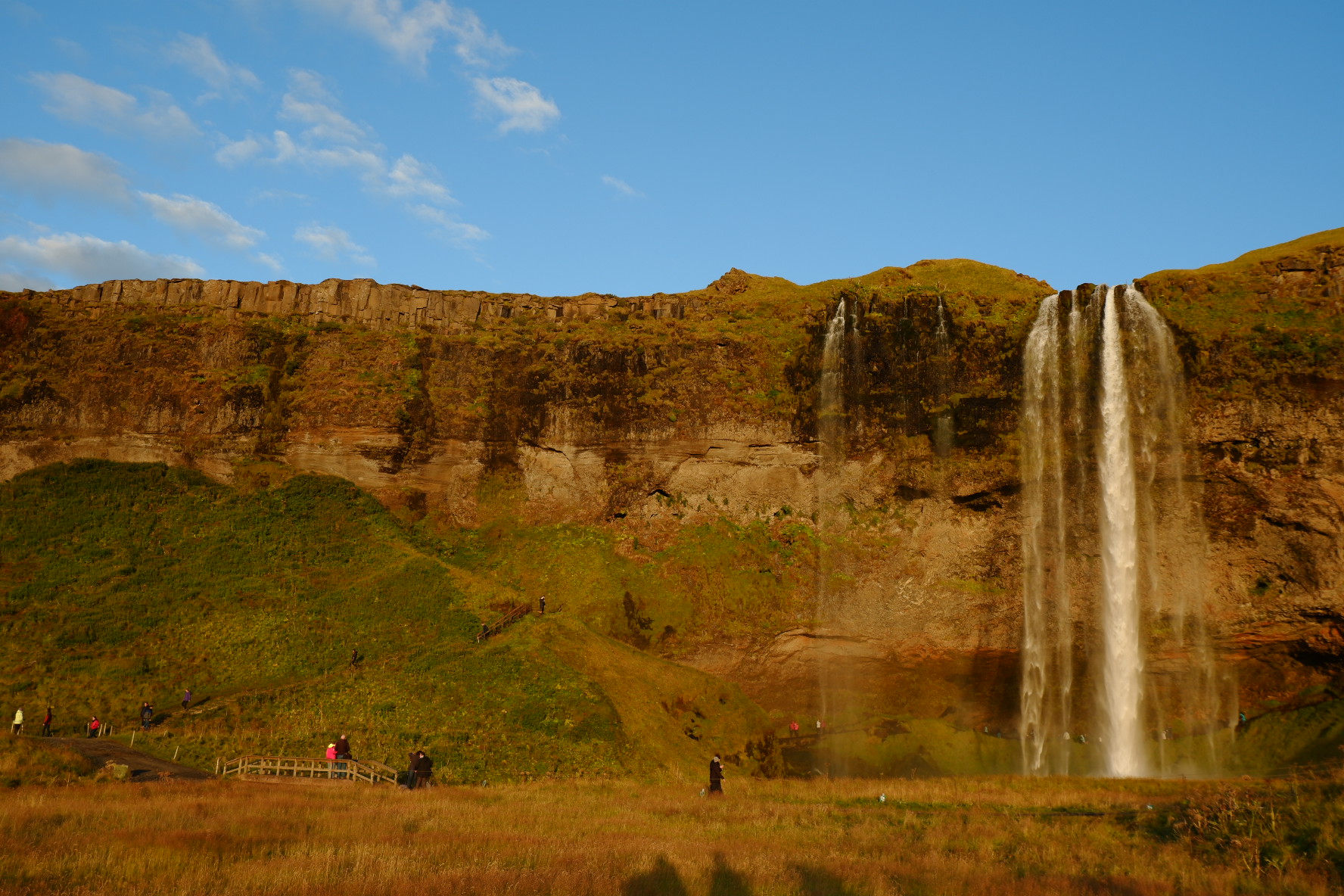 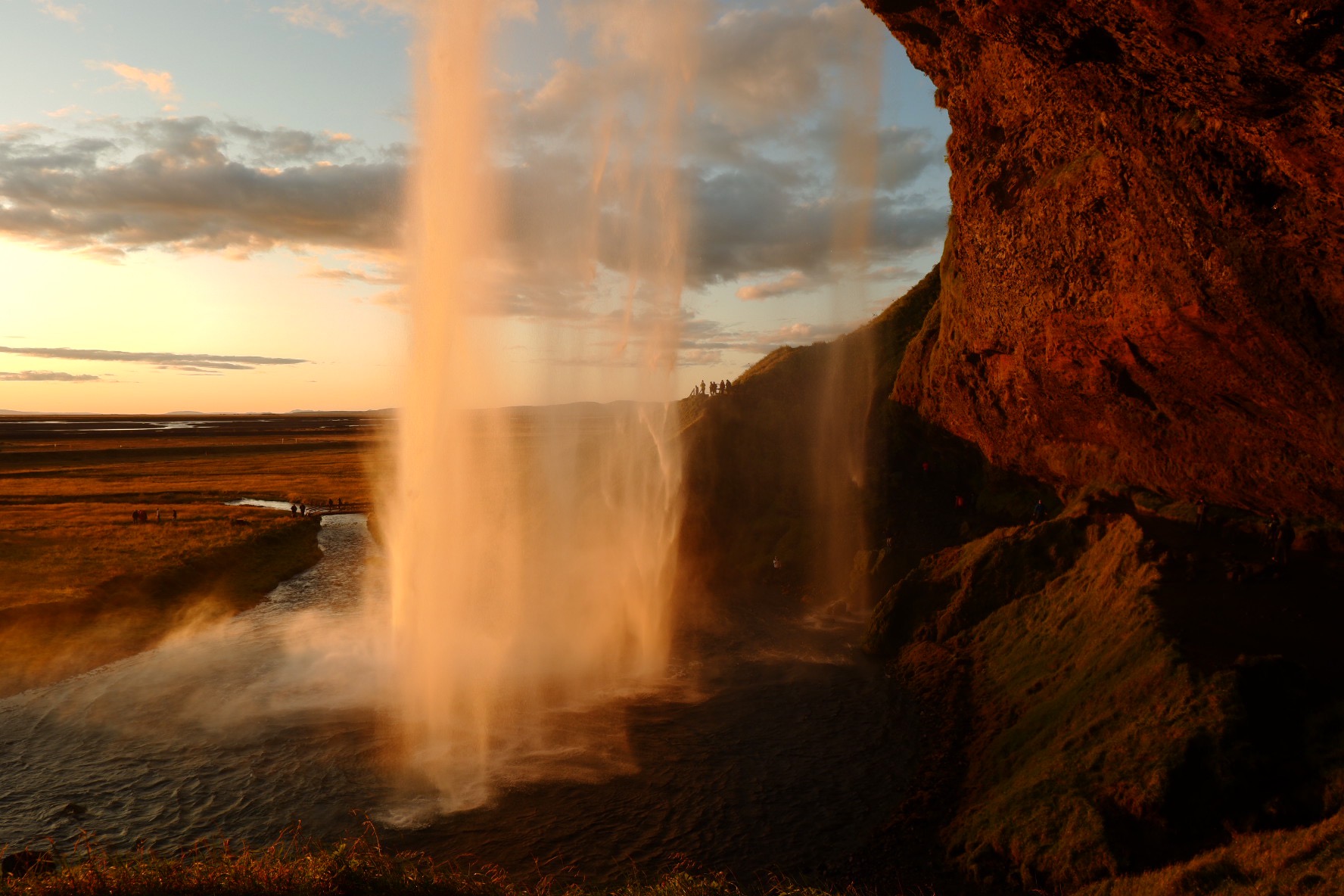 Crazy right! It was literally a dream

On day six, in the morning, we decided to hike to the oldest outdoor thermal pool in Iceland. Seljavallalaug Swimming Pool was built in 1928 and is open to the public. The hike was about 25-30 minutes from the parking lot and all we brought were our towels, cameras and a few brews of course. What better way to start your day off with a relaxing swim, few brews and surreal scenery.

Warning if you decide to swim in the pool, there is a lot of algae that gets stuck to your body and swim suit. I recommend you don't dunk your head or wear your favourite swim suit.

Later on we headed to yet another waterfall. This one is called Gullfoss. The power and magnitude of this waterfall was amazing. I regret to tell you that I didn't take many photos when I was there because I wanted to experience it without distractions, but of course I did snap one picture ;).

Day 7: Off to the next destination

We were finished our trip in Iceland, but I can say with confidence that it will not be my last. Iceland is a world within a world, filled with beautiful natural features and wonderful culture.

Until next time Iceland!